Oh the excitement of returning to a holiday destination. When the almost teenager says, ‘Ah I can feel the relaxation’ as she stands at the door of the aircraft, looking out across the runway, after we land. There’s none of the trepidation – will they like it, what’ll the food be like – instead the utter delight and anticipation of the return. At the hotel we are welcomed as friends by the all Greek staff. ‘How you have grown you teenagers! What can we get you? Some pasta, a pizza?’ It’s 11pm and they stay on til we are fed.

Looking out from our rooms at the dark sky studded with stars, and the darker sea beneath which we can hear gently lapping at the sandy shore. Oh thank you Hotel Ammos. Now at last the children have their oh so coveted Instagramable views…. and we have the foreign escape without cooking or washing up that we’ve been counting down to for the past year. And the breakfasts we have been dreaming of. 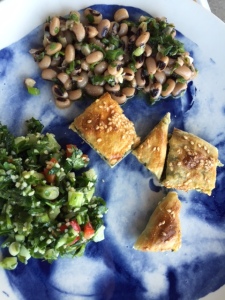 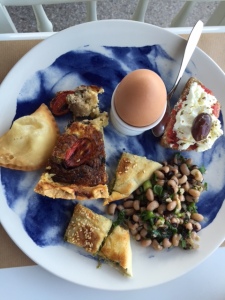 One night we swam in the sunset. It was like no other swim. The village was backlit by the rapidly descending sun, and floating on our backs, toes to the orange orb of the sun, our feet were silhouetted amidst an almost oily sheen of deep orange and burnt pink. On the shore the wet slopes of sand were on fire, illuminated in a deep amber before each frothy wave wiped the surface clean again. No phones, no photos, instead a memory etched into our brains.

Here I swam for me and not my Aspire Challenge. No more was I swimming to clock up the metres and miles, in the quest to swim the distance across the English Channel in aid of the spinal injury charity Aspire. Having said I’d do my distance outside, it seemed a bit wimpish to finish it off in the warm waters of the Med rather than in the chilly depths of the lido.

There’s a rocky outcrop to the side of the bay, perhaps a 45 minute round trip, so twice I swam and swam and swam out to it and back for breakfast. Other days the sea was choppy and we decamped to another bay where we swam across its glassy surface.

I’ve escaped into books. Elizabeth Laird’s Welcome to Nowhere – so apt to be reading about an every day Syrian family whose lives were utterly transformed by the advent of fighting, to learn of prejudice and injustices, and hardships of refugee camps – and then to go into the local town and see migrants busking and selling toys and to wonder where they had travelled from and about the lives they’d left behind. And then to disappear into the depths of Amy Liptrot’s The Outrun. A book steeped at first in the buzz and furious pace of urban life and then in the wilds of the Orkneys, with snorkelling amongst seaweed, winds so strong caravans are tied down with concrete blocks, and enormous personal challenges. Lying on a beach in Crete it made me long for Mull, for Eigg and to return to our family’s, and my own, adventures there. 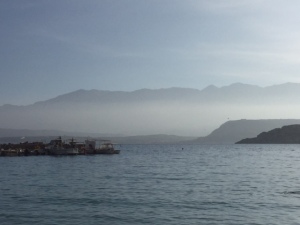 As wave jumping replaced swimming, and the four of us played amidst the breakers in the warm drizzle, sometimes being swept up washing machine style in the waves, I realise we’re quitting Crete ahead. It has given us three magical half terms, dashing from the sea to the shower to the pool, spent in the water, stuck into books, sometimes into phones but also united around the table playing fiercely competitive games of cards. The bar’s been raised high as we start to look for another destination offering warmth, water, delicious food and a welcome as good as Hotel Ammos’s. 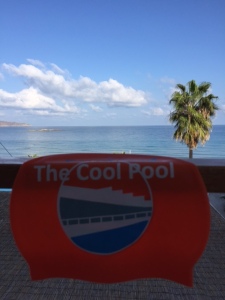 As we departed from Crete we spotted a submarine in the waters beside the runway. Quite something eh.