Early on our children realised, unconsciously or not, that it would be a good idea to do different sports from one another. One snowy Sunday aged 3 1/2 he decided to try out at her ballet class. Dressed in blue and white striped pyjamas he gave it a go. Disaster. It was no fun at all for her to have her class invaded by her pesky brother. After that she never went to ballet again, the teacher had spent too much time praising her twin, she just couldn’t go back with or without him. So years later she took up competitive swimming, and he football later adding athletics and cricket into the mix.

Today he is utterly fed up that she won’t recognise him for his successes on the track. After the first race she couldn’t hide how impressed she was, asking him about his times, his splits and for how long he led. But now she’s not quite so vocal.

She’s fed up because he no longer congratulates her on her victories in the pool.

I think this is nonsense, he’s swift to praise when she comes home clunking a medal or brandishing a new personal best and she’s quite good at patting him on the back. But it doesn’t matter what I think, or what we say, it’s what they think that counts.

Urgh, how to encourage both children to be generous. Normally they get on pretty well, but of course as siblings they’ve got the ability to really annoy and persecute one another. We can’t draw on much experience as parents as neither of us enjoyed many podium moments when we were growing up (but I did win my first event at Durham Regatta many decades ago and I did get a medal for my Aspire swim the length of the channel swim…).

I know we don’t get recognition for many things in life, but boy does it taste sweet when you do. Whether you’ve won a new piece of business, a project you’re involved in has made a mark, or you’ve scored a new job – when people comment and notice it makes you glow, doesn’t it. When you get a medal or a gong or something more it’s all the better. I am so proud of being able to wear my British Swimming lanyard at galas now when I officiate (what?! well it shows I’ve spent hours poolside enough time swotting over the rules to qualify as a junior judge).

I fear social media makes us crave recognition, be it a like or a share or a retweet, all the more. 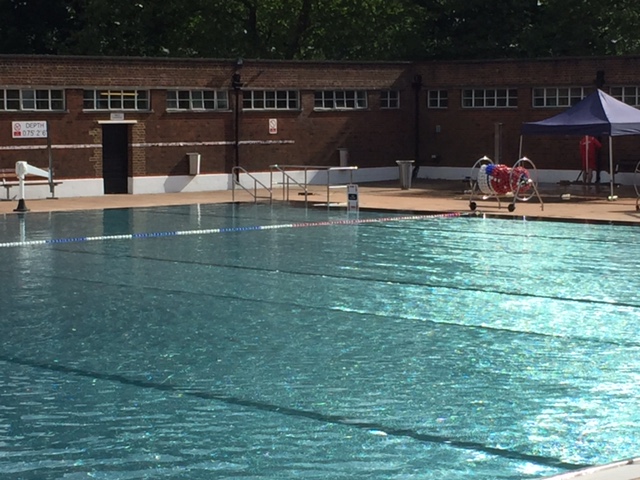 Sport England’s #ThisGirlCan campaign has been everywhere over the last week or so. It’s polarised opinion; some feel it’s sexist, the women in the clips look too fit with too much cleavage on show, whilst others think it’s great – and I’m firmly in that camp. It’s got us talking about exercise and that’s a good thing, surely. I’ll write another time what the twins think of #ThisGirlCan film…

We are a sporty household, home to:

Supportive Husband: speedy cycler-to-work, kick around in the park footballer

This means the house is full of kit and trainers and on a bad day the hall is a jumble of football boots, trainers, pool buoys, swimming bags, bikes and balls.

In between work, school, homework and sporting commitments there’s not much (woops, any?) time for culture and music. Some families juggle it all and do lots of trips to places but we don’t.

The #ThisGirlCan campaign got me thinking about what sport has meant to me in my life. I went to a girls’ boarding school where lacrosse dominated, the games mistress used to say we should be ‘masters of one sport’ rather than trying out lots. This didn’t work for me, or anyone who wasn’t in the school team. Weekends were spent sitting on wet grassy slopes, enrobed in enormous school cloaks, ‘watching’ the teams play whilst smuggling sweets into my mouth. Not great. My sister told me the only way to survive GSCE and A Level exam season was to make use of the offer of daily swimming, so every day during those summer terms I swam up and down the school pool. I tried running in the 6th form. This entailed going out on my own in the dark stumbling around the school grounds. Not great.

Exercise means a lot to me now. This diagram pretty much sums it up to me:

I asked the children what it means to them and why they like it. Here’s what one said:

I’m good at it

It makes me feel good

It’s nice away from school stuff

I like winning (when I said it wasn’t all about winning she said no, but that’s the best bit)

What she didn’t say was how her confidence has grown as her swimming has improved, hurray.

Next time it’ll be the turn of the Footballer.

When I was 40 a very good author friend introduced me to Couch to 5k. This running programme does exactly as it says, it gets you off the couch and able to run 5k. It’s a 9 week programme and it’s brilliant. So in 2013 (6 months after she told me about it) I downloaded the podcasts – not the NHS one she recommended but for some reason an American one starring a 40 year old runner called Robert Ullrey. It really does work. You simply do exactly as the voice on the podcast tells you to, 3 times a week. So thank you Robert for getting me running. I even earned a hand drawn ‘Well Done Mummy’ picture from the Speedy Swimmer, featuring a rather large and lumpen figure slumped on a couch, with an arrow to an unrealistically thin stick figure running off in the distance. I had to stop last spring when I had a stint off games, but I’ve started again and am managing to look after my back better this time round. If only such a running programme had been on offer at school!

At university I took to the water and took up rowing. This was good fun, and being a member of the college rowing club led me to hang out with other sporty people – mainly hockey players – on my course. But I couldn’t run, I was hopeless at land based training. Oh the memory of a ‘compulsory run’ for the college club, to which only 2 girls turned up. The other girl sped off with the boys and I was left stopping and starting miles behind, mortified. I could handle the ergo though, and loved pulling high scores for 2k pieces. By my third year I had somehow taught myself to run / pound the pavement for an hour.

And now of course my favourite sport is swimming. It’s brought me and the Speedy Swimmer closer together as she shares her swimming tips and every now and then gives me some coaching in the pool.

I have been helped and supported by so many people on my sporting journey to fitness and back to fitness. I have three cheerleaders at home, and was lucky to have many lovely friends and colleagues like Lauren (marathon runner) and Georgia (swimmer) making all the  right noises as I regaled them of my attempts to run and swim. Thanks guys!

Around the nation people are attempting to tighten their belts around their festive paunches. In this household we’re preparing to let them out another notch for today is the Footballer and Super Fast Swimmer’s 11th birthday and there will be cake for tea. Early Jan is a pretty dire time for a birthday, but at the time back in 2004 I didn’t fancy hanging onto them inside any longer and I was very proud of how long their gestation was. So there’s been more cake baking and icing. They share a cake on their birthday – and have separate ones for their parties. For the second year running we’ve gone down the separate children separate icing route…

Today I had a long list of things to get done, with baking a reward for achieving some of the bigger and less appetising looking tasks.  There was no time for messing around, coffees or chats at the school gates, so instead straight up to my desk, fingerless mittens on and flask of hot tea at my side. This thermos business is a winner – it means no excuses for ‘just popping to make a cup of tea’ as I have a ready supply of piping hot tea inside it.

This new sense of urgency that’s arrived with the kids’ return to school has really taken hold, and it’s very exciting. I’ve workbooks filling with to do lists. Some of the tasks I’d rather not do, or am apt to dodge, but thanks to the 10 minute rule (set a timer, work on the less attractive job, and by the time the pinger goes you’ll be so into it you’ll complete it) I’m on track.

There was no prevarication either on New Year’s Day when me (donning 2 swimming hats and a costume), a friend and 3 children took to the North Sea for a quick dip. The adults had a proper swim, the kids a swifter immersion. It was beyond invigorating, it was BLISSFUL and BRACING. I can’t remember it being cold, but I do remember wanting to go straight back in afterwards. Here I am post swim with my brilliantly supportive and towel holding husband and a devilish glint in my eyes.

There was a smashing opinion piece in The Telegraph about cold water swimming recently which pretty much sums up all that’s good about it, and talks specifically of the hit you get going swimming in cold water. Addicts like me rave about the wonders of it,  how high the cold makes you feel, and how alive you are afterwards, but now  Dr Mark Harper a consultant anaesthetist at Brighton and Sussex University Hospitals (and expert advisor to the Outdoor Swimming Society) has researched the impact of cold water swimming on the body and says, in the Telegraph piece, ‘The benefits of exercise and cold-adaptation include better mood and better metabolism (especially with regard to the way the body handles sugar). There is even evidence to support the theory that cold adaptation –which can be achieved through open-water swimming – may actually reduce the overall risk of a heart attack.’

So when I got to Kentish Town Baths and saw this sign I ignored the groans and complaints from the ladies in the changing rooms, made some (probably annoying) very positive remarks, just thought ‘go for it’ and went for it, so  a swim in cool water, followed by a properly cold shower. Crazy? Probably. But boy I didn’t suffer from any kind of afternoon slump today, and I’m well awake and raring to welcome home my just turned 11 year olds.